A cold snap to hasten Spring

As I write, we are heading into what is forecast as the coldest week of winter to date. I remember thinking a few weeks ago that we weren't out of winter yet and just maybe there was a final sting in the tail before we reached April. Step forward February!

The last week or two has actually been quite good, weather wise, and we have all noticed a bit of budding on trees along with snowdrops and other spring bulbs starting to push through. A bit of birdsong has also hinted at an early start. As with March 2017, it may be a false start. 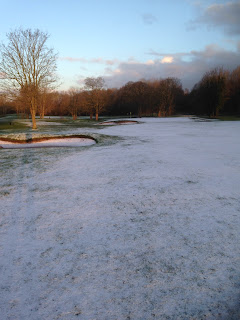 We had a little snow too in February which halted a very disappointing and wet winter. Our rainfall statistics have made depressing reading. Certainly, many local golf courses have endured a similar plight this winter. Weather patterns indicate wetter, milder winters and certainly a mixed bag in summer. It seems also that Spring starts later every year.

I think that next winter might be a good time to execute some drainage installation on certain areas on the golf course. Getting playing surfaces returned to something approaching 'dry' is essential, given golfers want to play year round. Drainage certainly won't overcome torrential rainfall - but it certainly won't do any harm either. 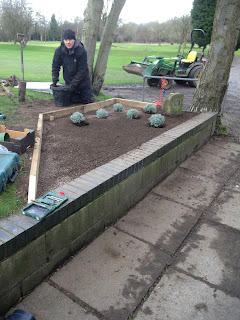 We have recently completed an overhaul of the 2 beds by the putting green. They were looking a little tired, overgrown and unkempt if I'm being honest. Moving into PPGC's 40th year, we thought that giving them both a bit of TLC was the order of the day. A low cost, immediate impact improvement. I managed to snag some lovely lavender from my local Waitrose. I was given some money from Alan Whitty - thank you Alan, and the seniors section - to get a few more shrubs. The 2 others in the bed (above) are Leucothoe scarletta and Berberis 'Tiny Gold'. The contrast of the foliage of the silvery blue Lavender against the crimson/green and yellow of the other two will make a lovely contrast. 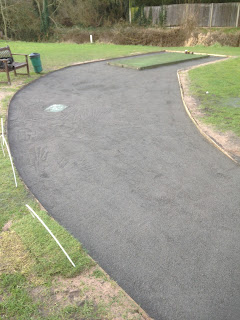 We recently finished off the shuttering around the 11th tee mat to finish this part of path area. It now looks a lot more defined and the path is now wider and, more importantly, drains really well after heavy rain. As you may recall, when we installed a new valve assembly, we put a lot of gravel as a soaraway around this area which used to consistently puddle after rain. Now, it is pretty decent. 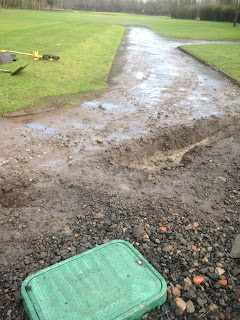 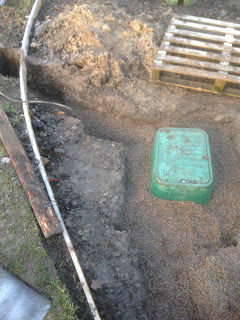 Last week saw the (near) completion of the 1st green side bunker. It has been a really enjoyable winter project to transform a bunker that was always difficult to maintain and to keep looking good. 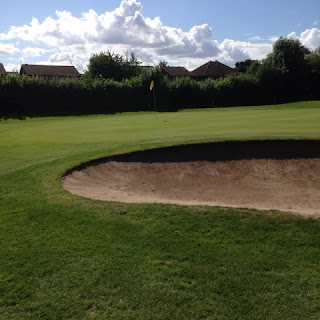 The photo above shows it in happier times (dry weather). The photo below shows it at its worst; devoid of decent sand, very poor aesthetically and compromised from a playability perspective - the ball would never gather in the middle of the bunker as it sloped from back to front. 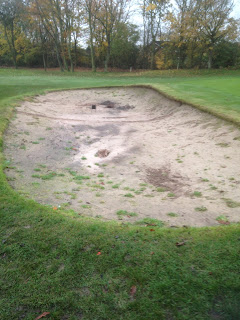 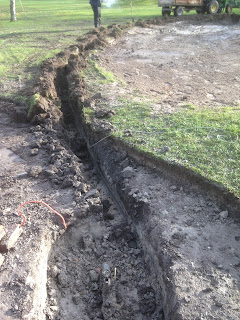 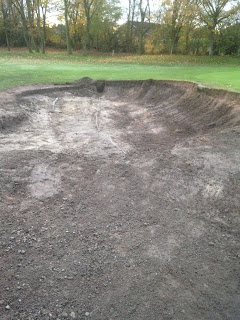 We also found irrigation pipe running through the middle of the base and so we had to re-route that around the back edge which worked out well, considering the valve assembly needed to be replaced as the wiring was corroded among other things. 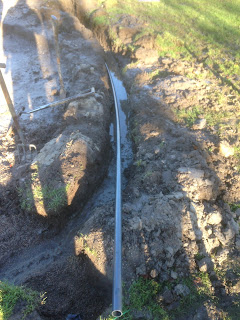 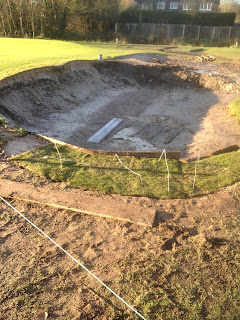 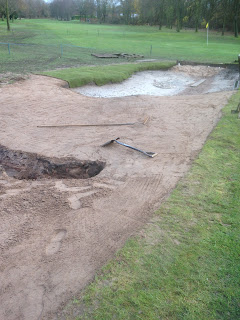 The part of the bunker that has been filled in and turfed has also had a large soak away installed to keep it dry - the soak away actually sits above the drain that will take water away from the bunker and out too the ditch near the 11th tee. 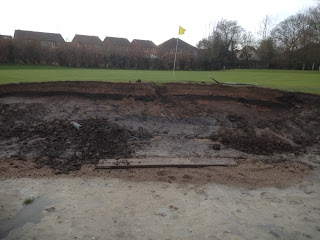 The above photo is interesting in that it demonstrates how sand splash from years of bunker shots can accumulate and raise the edge of the bunker (light sand on top of dark sandy soil). This became obvious as we were edging the bunker and grading the face & base of the bunker. 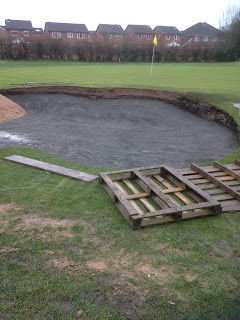 A skimming of path grit should hopefully bind to the clay base and provide a more sterile base that weeds will find hard to colonise. It will also help to stop the bunker sand from migrating into the drain. 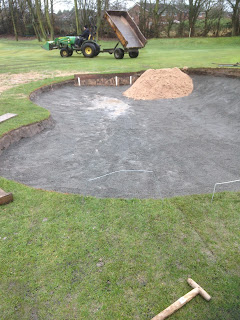 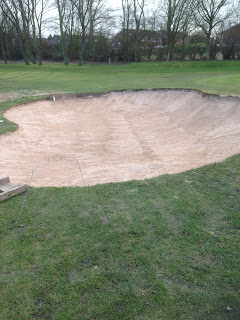 Now that the bunker has been sanded, we just need a few more weeks to allow it to settle. Dare I say it but a bit of rain will help it to compact!!

We are now progressing with the 8th fairway bunker. That is a little more challenging as it has been pelted with rain and needs a bit more work doing with the drain. That said, a dry week will help us to crack on with it.

Enjoy your (dry) weekend and hopefully a round of golf too!
Posted by Ben Allen at 04:19 No comments: